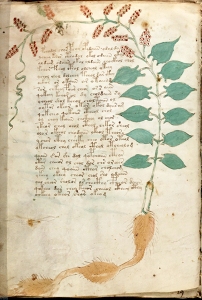 Every now and then some piece of news makes the rounds about the Voynich manuscript, a peculiar hand-written book, kept nowadays at Yale. This time it’s a beautifully made video on the codex.

The manuscript is named after a Polish collector and manuscript dealer that acquired it in 1912, but it had a lot of owners before him and after him, before it ended up in Yale. The peculiarity about it is that it is written in an otherwise unknown writing system, in an equally unknown language. Because of its uniqueness, one of the hypotheses regarding it is that it is a fake; yet, carbon-dating showed that the leather (parchment) on which it was written dates to the early 15th cent. Because it remains undeciphered and poorly understood, it has attracted the attention of scholars and public alike; many prospective decipherers have tried their luck with it, but like many instances of unique pieces of writing, the validity of their proposals remains to be proven.

Last year, Yale University Press produced the first proper facsimile of the manuscript, and reviews of it appeared in the New Yorker and the New York Review of Books. It is interesting how the theories surrounding the manuscript range from the occult to the conspiratorial. And I have a feeling that this manuscript will not cease to feed into fantasies and prospective decipherments any time soon. 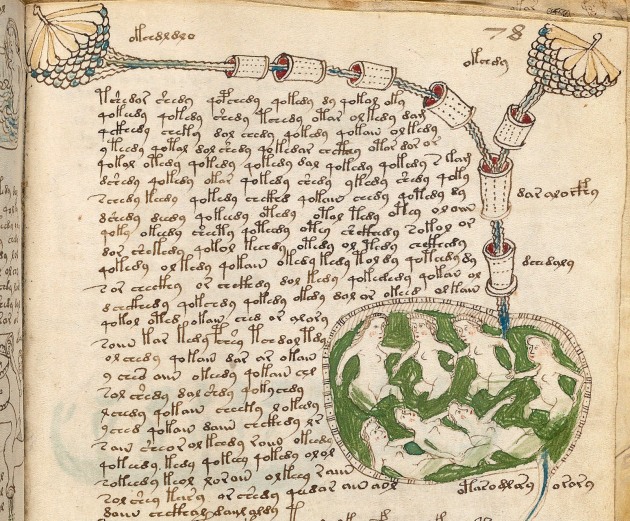 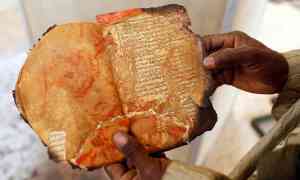 “Responsable is a French noun whose meaning is easy to guess at in English. There were few better words to describe the librarian then than as a responsable for a giant slice of neglected history, the manuscripts of Timbuktu, a collection of handwritten documents so large no one knew quite how many there were, though he himself would put them in the hundreds of thousands. The manuscripts contained some of the most valuable written sources for the so-called golden age of Timbuktu, in the 15th and 16th centuries, and the great Songhay empire of which it was a part. They had been held up as proof of the continent’s vibrant written history. Few had done more to unearth the manuscripts than Haidara [Abdel Kader Haidara, the librarian of Timbuktu]. In the months to come, no one would be given more credit for their salvation.

In person, the librarian was an imposing man with a handshake of astonishing softness, a drive-by of a greeting that left a hint of remembered contact, no more. He was well versed in the history and content of the documents, but appeared not so much a scholar as a businessman who controlled his affairs in a variety of languages via his mobile phones, or in person from behind a desk the size of a small boat. He was not the only proprietor of manuscripts in the city, but as the owner of the largest private collection and founder of Savama, an organisation devoted to safeguarding the city’s written heritage, he claimed to represent the bulk of Timbuktu’s manuscript-owning families.”

“By the end of 2012, however, Savama informed the German embassy in Bamako that between 80,000 and 120,000 manuscripts had been successfully evacuated from Timbuktu.”

The nail-biting story of how thousands of manuscripts were transported to safety in Mali in 2012 and 2013, thus saving them from a near certain auto-da-fé.

There seems to exist also a study project, the Tombouctou Manuscripts Project (supported by the University of Cape Town and the Gerda Henkel Stiftung), which has been “has been very much concerned with the diverse content of the manuscripts, the circulation of scholars and ideas, the economy of the manuscript book, and other aspects of the “work of scholarship” in Timbuktu.” But, besides examining manuscripts from Timbuktu, the project has expanded in order ” to encompass writing cultures from other parts of the African continent.” And in the project’s participants own words: “New discoveries of collections have been identified in Mozambique and Madagascar, in both Arabic and so-called Ajami (Makua in Arabic script, Malagasy in Arabic script). Existing collections in Zanzibar (in Arabic and Swahili) have been supplemented with new work on private libraries. A recent publication of a collection of legal materials from coastal Somalia has directed attention to materials there. In Ethiopia there is a long-standing tradition of Coptic Christian writing in Amharic and research on Amharic book arts is necessary; there are also texts written in both Arabic and Amharic in Addis Ababa archives. The list of examples goes on and covers many parts of the continent.

There are multiple questions that are emerging with the “rediscovery” of various manuscript collections on the continent. The two main areas that the project aims to focus on are “the history of books” in Africa, and the state of the archives in which these manuscript books reside. The former places the African world of books firmly within an international discussion in the growing field of “the history of books”, where it has no presence at the moment. The latter, a more practical issue, approaches the way in which archives are constituted and appropriated: the politics of the archive.”