The Association of European Printing Museums (AEPM) is holding its annual conference between 11 and 14 May 2017 in Chania, Greece. One of the speakers, Georgios Matthiopoulos from the Technological Educational Institute of Athens, will present a paper entitled “The Grecs du roi meet early Cretan literature in a Street Art performance throughout Crete: a school project”.

An article in a local newspaper from Chania drew my attention to the conference; that and the fact that I had a number of unknown concepts in the title of the paper! So, it seems that Matthiopoulos put together a project for school children, in which he wanted to combine an early Greek typeface (‘grecs du roi’), with early Cretan literature (the period of blossom: 16th-17th cent AD) and graffiti, the modern street art form.

The typeface ‘grecs du roi’ was designed by Claude Garamont himself, the famous Parisian punch-cutter who gave his name to a series of typefaces still used in our digital world (Garamond fonts). Garamont apparently designed by order of the French king in 1541 punches of Greek letters to be used in the printing of books in Greek. He followed models and instructions of the royal calligrapher Angelo Vergezio, who came originally from Crete. His effort was to imitate hand-writing of the time, which however contained a lot of ligatures and alternate ways of spelling words, as the cursive version of any script would. It seems that the result was an elegant, much admired although complicated font, which came to be known as ‘grecs du roi’.

A 1550 edition of the New Testament printed by use of ‘grecs du roi’ (source: typolexikon.de)

Recent research suggested the possibility that Garamont was not in fact the inventor of the typeface, instead they had been developed already by his master, Antoine Augereau, who allegedly had a strong knowledge of Greek and a solid education; it seems that this education caused Augereau his life, because he was burnt together with his books as a heretic by the Inquisition in 1534.

Regardless of who invented what, the ‘grecs du roi’ is a beautiful typeface and very recognizable as evidence of Renaissance early typography. I assume this is what inspired Matthiopoulos to plan a project that brought together this specific typeface, early Cretan literature (the poem of Erotokritos, a famous 17th cent Cretan poem) and school children. The children were called in to paint stenciled graffiti on the streets of Chania, the Cretan city where the conference will take place shortly. The graffiti are verses from Erotokritos. 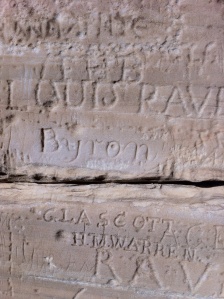 A conference on graffiti as historical sources is taking place between 20 and 22 April 2017 at the Ludwig-Maximilian University of Munich in Germany. The conference discusses these unofficial inscriptions, methods and techniques of study as well as preservation methods.

A graffito functions as a person’s makeshift signature in a public space, carved or painted by themselves in order to commemorate their presence on the spot. The picture shows the English poet’s Byron signature, which he carved himself at a column in the Poseidon temple in Sounion, Greece. Byron visited Sounion at the beginning of the 19th cent. AD. It is more than probable that Byron would be seen nowadays as a vandal; this only shows our changing cultural attitudes towards graffiti. There are many fascinating aspects of graffiti to be studied and highlighted, which I am certain the Munich conference will address.

The workshop took place in Athens, Greece, and was aimed at discussing various aspects of scribal work and how these relate to language use and language change in Graeco-Roman Antiquity. Because a lot of information we have on scribes comes from papyrus texts, the workshop was heavily populated by Egyptologists and Coptologists! But there appears to have been some space reserved also for us epigraphists!

I found it to be a sad coincidence that as we were busy with our workshop in sunny Athens (rather with an excursion to Mycenae the day after the workshop concluded), twin attacks on two Coptic churches in Egypt claimed the lives of dozens of worshipers.. The attack prompted some articles about who are the Copts and why they were being targeted.

A photo of the happy participants, taken at the courtyard of the Finnish Institute in Athens!